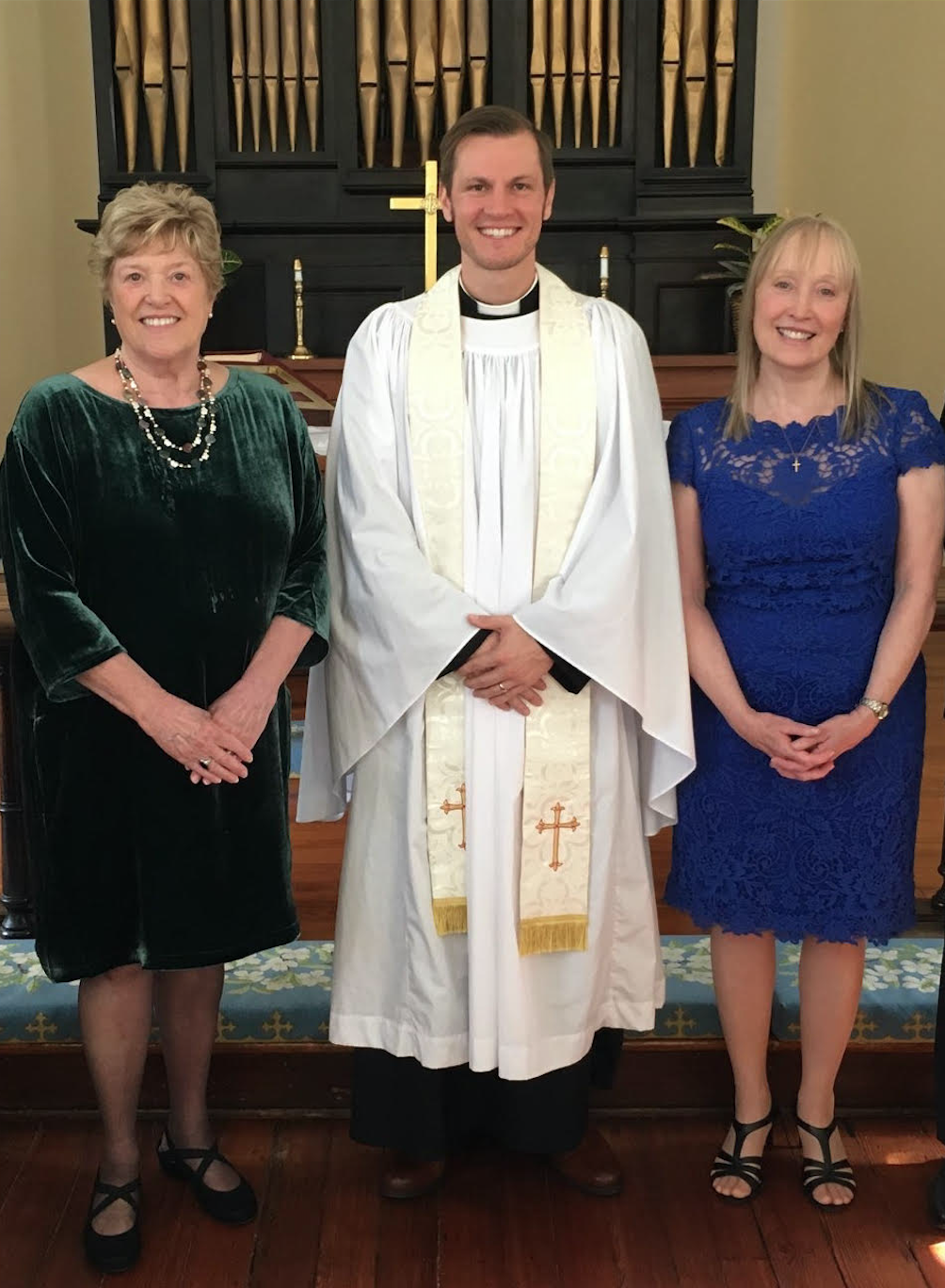 Pictured: The Rev. Ryan Streett with Roseanne Gudzan (right) and her sister Susan Varner after their baptism on November 1, 2018.

In July of 2018, a summons ordered me to report to Charleston Municipal Court for jury duty in early August. After reading the very limited exemptions from duty, I realized that resistance was futile and reported on the required Monday morning to fulfill my civic duty.

As it turned out, a priest named Ryan Streett and 40-some other Charlestonians had been summoned for this same jury duty, and we all sat in the courtroom that Monday waiting to see if we would be selected. Later, those of us who were not chosen for the first case lined the walls of the hallway outside the courtroom waiting for the next case to be called. The week progressed this way and with a great deal of waiting outside the courtroom in the hallway.

During a particularly long recess, I spotted Father Ryan and I nervously approached him, introduced myself, and asked if he ever performed baptisms for people other than those in his congregation. I was about to go into a detailed explanation of my reasons for asking when we were called back into the courtroom. The mass of potential jurors started moving down the hall and through the door. Hurriedly, I blurted out to Father Ryan that I and my sister Susan, who lives in North Carolina, were birthright Quakers and had never been baptized. (Quakers believe in baptism by the Holy Spirit and that baptism is an inward, not outward, act. Therefore, Susan and I had never gone through a formal baptismal ceremony, although we had talked about doing so for years.) Father Ryan quickly told me his office address and hours as we parted to sit in separate rows in the courtroom. This was the last case of the week and everyone held his or her breath as the clerk called the last 12 juror names. Neither Father Ryan nor I was selected and we, along with the other dismissed jurors, made a dash for the exit door. Outside the courthouse, Father Ryan caught up with me, gave me his card, and encouraged me to call him.

My intention was to call Father Ryan right away, but life, a Berkeley County jury duty later in August (I must have been on a list), and a hurricane delayed my calling until September. When I did call, Father Ryan invited me and my husband, Nick, to meet with him. In our first meeting Father Ryan related that at jury selections he could tell I was anxious and that he had said a small prayer for the Lord to calm me. Nick then joked that I had also said a prayer for Father Ryan––that he be selected instead of me! In his soft-spoken and gentle way, Father Ryan guided Nick and me over the next two months to better know the saving power of Jesus Christ and what it means to be a Christian. After another hurricane passed, Susan and her husband, Jim, came from North Carolina and also met with him.

Father Ryan baptized Susan and me on All Saints Day in the St. Philip’s Chapel. After our baptism, we took our first communion. What a lovely and memorable ceremony! At the end of the service, St. Philip’s church bells started pealing. Although I am sure they were marking the noon hour, Susan and I could not help but feel that they were ringing to celebrate our renewed commitment to Jesus Christ.

Over the past five months, Nick and I have grown spiritually in ways that we could not have imagined. We completed St. Philip’s confirmation class and have regularly attended Sunday services. My participation in the spiritual gifts workshop helped me to find ways to better serve Christ and St. Philip’s Church. As I look back, I have no doubt that God in His divine wisdom guided me to jury duty and Father Ryan. So, the next time you’re grumbling about a jury summons, simply remember that something wondrous just may happen. God does, indeed, work in mysterious ways!

Worship With Us Tomorrow, the Second Sunday in Advent!