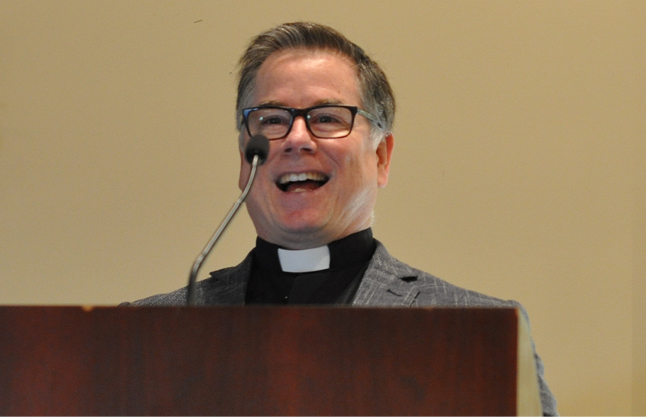 The first of Australian author and speaker John Dickson’s two Sundays at St. Philip’s could not have been scheduled any better, as it coincided with a day when the children’s choirs of St. Philip’s were singing. “Kids sing” Sundays always put a few more folks in the pews, and sometimes those folks are people who have not heard very much about the Christian faith, perhaps even some who haven’t heard the facts of our savior’s very existence.
The Rev. Dr. John Dickson took the time in his sermon, entitled “Gospel Certainty,” to explain just how we know Jesus was here on Earth and how we even know exactly when he was here on Earth. He also shared a story about his relationship with an elderly French atheist named Marie, a friendship he described as “one of the most endearing and surprising” of his entire life. Marie, whom he laughingly described as “a bit of a snob,” studied and “devoured” the works of atheist philosophers for years and “lived the life of experience.” While she was serving as an academic at Sydney University and she first met a member of Dr. Dickson’s church, someone who shared just a little about the Christian faith her, “she was initially quite scoffing,” Dr. Dickson said. “That was beneath her.”
If you missed Dr. Dickson’s sermon and the conclusion of Marie’s faith story, please check out our “Sermons” podcast or click here to listen on our website.
Part one of Dr. Dickson’s two-part Rector’s Forum talk, “Promoting the Gospel in a Post-Christian World,” is available on our "Rector's Forum" podcast or on our website. He will deliver part two this Sunday, February 16, at 9:30 in the Parish Hall in between preaching at both services.
Dr. Dickson’s special mid-week event, “A Doubter’s Guide to the Christian Faith: A Defense of the Things All Christians Agree On,” will be available through the “Other Classes and Offerings” link on the Sermons and Classes page on our website, or on your favorite podcast app.
Tweet
Tweet