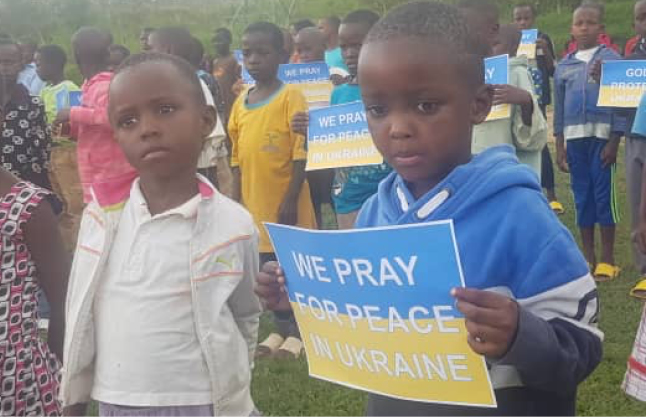 When the war in Ukraine burst upon the global stage, many Americans were stunned by the tragic events occurring there. Even in distant places like Rwanda, reports of the Ukrainians’ blistering reality have spewed out like shock waves into their homes. Many Rwandese have only recently learned about the ethnic connections between the Ukrainians and their Russian families and friends, and this has triggered harsh memories of their own “war”—as they refer to the genocide—over ethnic tensions and territorial disputes. These painful memories have stirred up old demons and post-traumatic stressors, especially as Rwanda’s annual Week of Mourning will begin in just a few short weeks on April 7.

The Russian invasion into Ukraine has affected not only Rwandan parents, teachers, and small business owners facing soaring costs; their children are also aware that something has changed. They hear tidbits of conversation at home, church, or school. They see their mothers’ furrowed brows as they worry and wrestle with the cost of food and fuel. They also hear reports on the radio and wonder whether something similar may happen to them.

Recognizing the insecurities that children might be experiencing, the team at the Dufatanye Organization (DO) gathered over five hundred children at the ministry center to share breakfast and to reassure them during their Bible lessons. Three Scriptures stand out from those lessons. The first two are Jesus’ promises to grant them peace in chapter 14 of John’s gospel. “Let not your hearts be troubled. Believe in God; believe also in me” (v. 1). “Peace I leave with you; my peace I give to you. Not as the world gives do I give to you. Let not your hearts be troubled, neither let them be afraid” (v. 27). It is important for children, whether in Rwanda or even here in the USA, to know that our Lord Jesus is with them, watches over them, and promises to give peace to them. When young children see images of displaced children––or even worse––on TV or tech devices, it can be unsettling and cause them to be afraid and have problems sleeping at night. Hats off to our team at the DO who recognized these vulnerabilities and sought to address them.

The third Scripture the DO team shared during the Bible lesson to our children in Rwanda was from Daniel 10. These verses seem to be especially pertinent to the war waging in Ukraine. Here, the prophet Daniel is mourning for his people who have recently returned to Judah after their captivity in Babylon. His brothers and sisters there are encountering harsh opposition, and Daniel has just ended a three-week fast to seek the Lord on their behalf. At the conclusion of Daniel’s fast, a heavenly messenger comes to him to reassure him that God has heard his prayers. He says, “O man greatly loved, fear not, peace be with you; be strong and of good courage” (v. 19a). Just as Jesus promises to extend His peace to His people in John’s gospel, this heavenly messenger makes a similar promise to God’s servant Daniel. Likewise, to the children in Rwanda and to His followers here in our community, Jesus makes this same promise, “Let not your heart be troubled. Neither let it be afraid.”

Note that the angelic messenger also explains to Daniel that “the prince of the kingdom of Persia” delayed him for twenty-one days from reaching Daniel. It was only after the angel Michael comes to assist him that the messenger reaches Daniel. If you carefully read Daniel, chapter 10, you will see that human conflict and opposition on earth often reflects opposition in the spiritual realm between the forces of evil and darkness and the realm of light through Christ. This is certainly true right now in Ukraine.  I urge you to intercede on behalf of the people of both Ukraine and Russia, that our Lord will provide for them, protect them from the spiritual powers of wickedness and darkness, and give them peace.