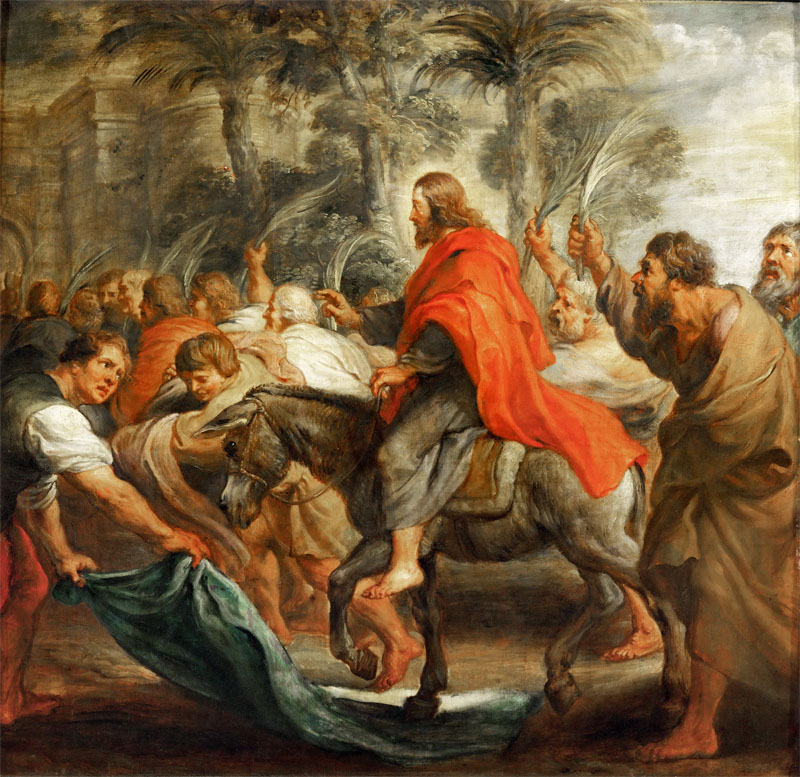 Sunday of the Passion: Palm Sunday

Almighty and everliving God, who, of thy tender love towards mankind, hast sent thy Son our Savior Jesus Christ to take upon him our flesh, and to suffer death upon the cross, that all mankind should follow the example of his great humility: Mercifully grant that we may both follow the example of his patience, and also be made partakers of his resurrection; through the same Jesus Christ our Lord, who liveth and reigneth with thee and the Holy Spirit, one God, for ever and ever. Amen.

1 When they drew near to Jerusalem, to Bethphage and Bethany, at the Mount of Olives, Jesus sent two of his disciples 2 and said to them, “Go into the village in front of you, and immediately as you enter it you will find a colt tied, on which no one has ever sat. Untie it and bring it. 3 If anyone says to you, ‘Why are you doing this?’ say, ‘The Lord has need of it and will send it back here immediately.’” 4 And they went away and found a colt tied at a door outside in the street, and they untied it. 5 And some of those standing there said to them, “What are you doing, untying the colt?” 6 And they told them what Jesus had said, and they let them go. 7 And they brought the colt to Jesus and threw their cloaks on it, and he sat on it. 8 And many spread their cloaks on the road, and others spread leafy branches that they had cut from the fields. 9 And those who went before and those who followed were shouting, “Hosanna! Blessed is he who comes in the name of the Lord! 10 Blessed is the coming kingdom of our father David! Hosanna in the highest!” 11 And he entered Jerusalem and went into the temple. And when he had looked around at everything, as it was already late, he went out to Bethany with the twelve.

5  Have this mind among yourselves, which is yours in Christ Jesus, 6 who, though he was in the form of God, did not count equality with God a thing to be grasped, 7 but emptied himself, by taking the form of a servant, being born in the likeness of men. 8 And being found in human form, he humbled himself by becoming obedient to the point of death, even death on a cross. 9 Therefore God has highly exalted him and bestowed on him the name that is above every name,10 so that at the name of Jesus every knee should bow, in heaven and on earth and under the earth, 11 and every tongue confess that Jesus Christ is Lord, to the glory of God the Father.

The Passion: Matthew 26:57-27:54 (NRSV—please note that what appears in the bulletin is slightly different)

20 Those who had arrested Jesus took him to Caiaphas the high priest, in whose house the scribes and the elders had gathered. 58 But Peter was following him at a distance, as far as the courtyard of the high priest; and going inside, he sat with the guards in order to see how this would end. 59 Now the chief priests and the whole council were looking for false testimony against Jesus so that they might put him to death, 60 but they found none, though many false witnesses came forward. At last two came forward 61 and said, “This fellow said, ‘I am able to destroy the temple of God and to build it in three days.’” 62 The high priest stood up and said, “Have you no answer? What is it that they testify against you?” 63 But Jesus was silent. Then the high priest said to him, “I put you under oath before the living God, tell us if you are the Messiah, the Son of God.” 64 Jesus said to him, “You have said so. But I tell you, from now on you will see the Son of Man seated at the right hand of Power and coming on the clouds of heaven.” 65 Then the high priest tore his clothes and said, “He has blasphemed! Why do we still need witnesses? You have now heard his blasphemy. 66 What is your verdict?” They answered, “He deserves death.” 67 Then they spat in his face and struck him; and some slapped him, 68 saying, “Prophesy to us, you Messiah! Who is it that struck you?” 69 Now Peter was sitting outside in the courtyard. A servant-girl came to him and said, “You also were with Jesus the Galilean.” 70 But he denied it before all of them, saying, “I do not know what you are talking about.” 71 When he went out to the porch, another servant-girl saw him, and she said to the bystanders, “This man was with Jesus of Nazareth.” 72 Again he denied it with an oath, “I do not know the man.” 73 After a little while the bystanders came up and said to Peter, “Certainly you are also one of them, for your accent betrays you.” 74 Then he began to curse, and he swore an oath, “I do not know the man!” At that moment the cock crowed. 75 Then Peter remembered what Jesus had said: “Before the cock crows, you will deny me three times.” And he went out and wept bitterly. 27:1 When morning came, all the chief priests and the elders of the people conferred together against Jesus in order to bring about his death. 2 They bound him, led him away, and handed him over to Pilate the governor. 3 When Judas, his betrayer, saw that Jesus was condemned, he repented and brought back the thirty pieces of silver to the chief priests and the elders. 4 He said, “I have sinned by betraying innocent blood.” But they said, “What is that to us? See to it yourself.” 5 Throwing down the pieces of silver in the temple, he departed; and he went and hanged himself. 6 But the chief priests, taking the pieces of silver, said, “It is not lawful to put them into the treasury, since they are blood money.” 7 After conferring together, they used them to buy the potter’s field as a place to bury foreigners. 8 For this reason that field has been called the Field of Blood to this day. 9 Then was fulfilled what had been spoken through the prophet Jeremiah, “And they took the thirty pieces of silver, the price of the one on whom a price had been set, on whom some of the people of Israel had set a price, 10 and they gave them for the potter’s field, as the Lord commanded me.” 11 Now Jesus stood before the governor; and the governor asked him, “Are you the King of the Jews?” Jesus said, “You say so.” 12 But when he was accused by the chief priests and elders, he did not answer. 13 Then Pilate said to him, “Do you not hear how many accusations they make against you?” 14 But he gave him no answer, not even to a single charge, so that the governor was greatly amazed.

Barabbas or Jesus? 15 Now at the festival the governor was accustomed to release a prisoner for the crowd, anyone whom they wanted. 16 At that time they had a notorious prisoner, called Jesus Barabbas. 17 So after they had gathered, Pilate said to them, “Whom do you want me to release for you, Jesus Barabbas or Jesus who is called the Messiah?” 18 For he realized that it was out of jealousy that they had handed him over. 19 While he was sitting on the judgment seat, his wife sent word to him, “Have nothing to do with that innocent man, for today I have suffered a great deal because of a dream about him.” 20 Now the chief priests and the elders persuaded the crowds to ask for Barabbas and to have Jesus killed. 21 The governor again said to them, “Which of the two do you want me to release for you?” And they said, “Barabbas.” 22 Pilate said to them, “Then what should I do with Jesus who is called the Messiah?” All of them said, “Let him be crucified!” 23 Then he asked, “Why, what evil has he done?” But they shouted all the more, “Let him be crucified!” 24 So when Pilate saw that he could do nothing, but rather that a riot was beginning, he took some water and washed his hands before the crowd, saying, “I am innocent of this man’s blood;[n] see to it yourselves.” 25 Then the people as a whole answered, “His blood be on us and on our children!” 26 So he released Barabbas for them; and after flogging Jesus, he handed him over to be crucified. 27 Then the soldiers of the governor took Jesus into the governor’s headquarters, and they gathered the whole cohort around him. 28 They stripped him and put a scarlet robe on him, 29 and after twisting some thorns into a crown, they put it on his head. They put a reed in his right hand and knelt before him and mocked him, saying, “Hail, King of the Jews!” 30 They spat on him, and took the reed and struck him on the head. 31 After mocking him, they stripped him of the robe and put his own clothes on him. Then they led him away to crucify him. 32 As they went out, they came upon a man from Cyrene named Simon; they compelled this man to carry his cross. 33 And when they came to a place called Golgotha (which means Place of a Skull), 34 they offered him wine to drink, mixed with gall; but when he tasted it, he would not drink it. 35 And when they had crucified him, they divided his clothes among themselves by casting lots; 36 then they sat down there and kept watch over him. 37 Over his head they put the charge against him, which read, “This is Jesus, the King of the Jews.” 38 Then two bandits were crucified with him, one on his right and one on his left. 39 Those who passed by derided him, shaking their heads 40 and saying, “You who would destroy the temple and build it in three days, save yourself! If you are the Son of God, come down from the cross.” 41 In the same way the chief priests also, along with the scribes and elders, were mocking him, saying, 42 “He saved others; he cannot save himself.[r] He is the King of Israel; let him come down from the cross now, and we will believe in him. 43 He trusts in God; let God deliver him now, if he wants to; for he said, ‘I am God’s Son.’” 44 The bandits who were crucified with him also taunted him in the same way. 45 From noon on, darkness came over the whole land until three in the afternoon. 46 And about three o’clock Jesus cried with a loud voice, “Eli, Eli, lema sabachthani?” that is, “My God, my God, why have you forsaken me?” 47 When some of the bystanders heard it, they said, “This man is calling for Elijah.” 48 At once one of them ran and got a sponge, filled it with sour wine, put it on a stick, and gave it to him to drink. 49 But the others said, “Wait, let us see whether Elijah will come to save him.”[t] 50 Then Jesus cried again with a loud voice and breathed his last. 51 At that moment the curtain of the temple was torn in two, from top to bottom. The earth shook, and the rocks were split. 52 The tombs also were opened, and many bodies of the saints who had fallen asleep were raised. 53 After his resurrection they came out of the tombs and entered the holy city and appeared to many. 54 Now when the centurion and those with him, who were keeping watch over Jesus, saw the earthquake and what took place, they were terrified and said, “Truly this man was God’s Son!”