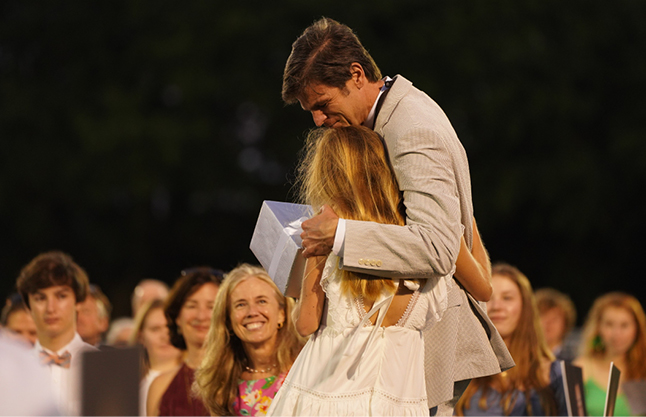 Lily O'Dell hugs her father, the Rev. Andrew O'Dell, after receiving The Rev. Anthony Toomer Porter award during the Porter-Gaud commencement ceremony on May 29. Photo courtesy of Porter-Gaud.

Whether they’ve got their diplomas in hand or they haven’t yet walked across that stage, St. Philip’s high school and college seniors are busy planning their next steps.

Jackson Ayers, who graduated from Porter-Gaud on Saturday, is excited to see what God has planned for him during the next four years at Clemson. He’s thankful for the entire St. Philip’s community––especially David Gilbert and the rest of the youth ministry team, without whom he doesn’t think he could’ve survived high school! Nathaniel Ford has had a great 12 years at Porter-Gaud, and while he’s a little nervous about moving on, he’s excited for an epic summer and the opportunity to meet new people when he arrives at Furman in the fall. Lily O’Dell, another Porter-Gaud grad (who, like her father before her, received The Rev. Anthony Toomer Porter Award on Saturday, the highest honor conferred by Porter-Gaud), is looking forward to serving as an intern at Camp St. Christopher this summer and assisting the staff and counselors as they minister to campers. Charlie Rohaley, who has had an interest in STEM and PLTW (Project Lead the Way) since first being introduced in the sixth grade at Moultrie Middle, excelled in the engineering track at Wando, earning several honors, including the Distinguished Engineering Graduate Award. He served as president of the Engineering Club and participated in various engineering projects in the community and at Wando, among them the development and design of the first outdoor classroom at Wando and the design of the Laing High School Memorial Court, which honors the ten principals who served from 1866-1970. He is looking forward to studying landscape architecture at Clemson.

Sissy Freshley was happy to be able to return to campus for her senior year at Georgetown University, where she earned her Bachelor of Science in Nursing. She did her senior capstone in women’s health at Sibley Memorial Hospital and will be working at a hospital in Bluffton in the labor and delivery department. Gordon Gibson’s original graduation ceremony from Pepperdine University’s Graziado Business School was postponed due to COVID, and he ultimately graduated virtually. He is now living in Los Angeles and is working for Sunrun Solar Company. David Grubbs earned his Bachelor of Science in Sports and Entertainment Management and has accepted a position with GlobalMed Logistix, a division of CrossLink. Travis King, grandson of Tom Moore, earned his degree in architecture at Clemson in four years instead of the usual five and maintained his spot on the Dean’s List all four years––even after enlisting in the Army Reserves after his junior year. Christopher Moss graduated summa cum laude from the Honors College at Clemson University, earning a Bachelor of Science in Microbiology and a Bachelor of Science in Genetics. He has accepted a fellowship at the Karolinska Institute in Stockholm, Sweden, and will be furthering his ongoing research in immunology in the lab where the Moderna vaccine was developed. He will begin his studies at Johns Hopkins Medical School following his year abroad.

O Eternal God, bless all schools, colleges, and universities, that they may be lively centers for sound learning, new discovery, and the pursuit of wisdom; and grant that those who teach and those who learn may find you to be the source of all truth; through Jesus Christ our Lord. Amen.

How to Pray for Our World Mission Partners and Missionaries

Thank You for a Hugely Successful Auction!