The mask requirement at St. Philip's has been lifted in accordance with City of Charleston guidelines. Click here to read the Rector's note to the congregation. PLEASE CLICK HERE for our in-person worship details and for information about worshipping from home. Please click here to join our email list. 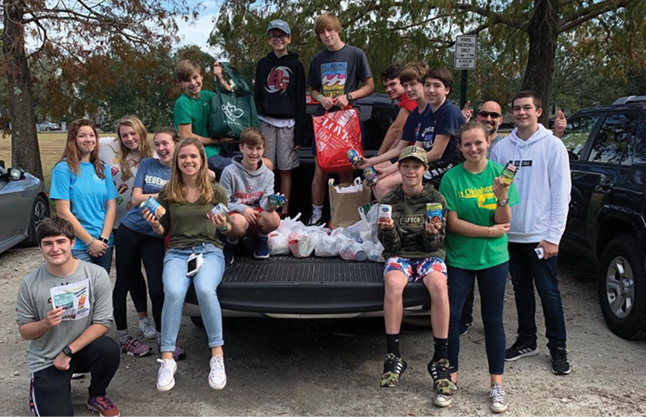 The Saturday before Thanksgiving, several St. Philippian youths met up with youth minister David Gilbert and youth leader Sarah Silcox to go door-to-door downtown to collect canned goods for Tricounty Family Ministries ahead of one of its busiest weeks of the year.

The kids divided themselves into small groups and headed off in all directions to begin their mission to top last year’s 600-pound total. Although this year’s total––upwards of 200 pounds––seemed like a big drop from last year (many folks were already out of town for Thanksgiving), David Gilbert discovered when he made the drop-off that afternoon that the food had come at just the right time, and Tricounty Director Sue Hanshaw was incredibly grateful.

Just the week before, Tricounty’s pantry shelves had been loaded down with food, but that week had been unusually busy, and the shelves were now almost bare. Because of the youths’ willingness to serve and the generosity of those who opened their doors to them, many people who would otherwise have gone hungry Thanksgiving week were able to be nourished. Thank you, God, for these kids and their leaders!

Worship With Us on the Sunday After the Ascension!