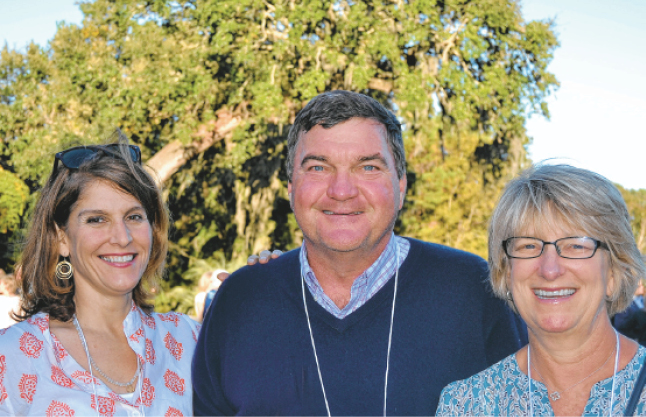 Many successful businessmen reach the peak of their church service when they assume the vaunted role of usher. This is not the men’s fault, of course — it is a tradition stretching back more than 2,000 years to when a little-known apostle named Fred served as the usher for the Last Supper, then slipped out before communion.

In contrast, 2002 found Carolina Eastern CEO Al Phillips teaching second-grade Sunday School at St. Philip’s in downtown Charleston. As the father of four, he was forged in the fire of second-grade attention spans and carried on the Sisyphean task with a smile on his face.

Then the real trial began: He was asked to step in to teach a seventh grade confirmation class … already underway. With no set curriculum, Al pondered and prayed and arrived at a solution: Since the Anglican process of confirmation is about teaching youngsters “what Anglicans believe,” he went to the source of what they believe—The Nicene Creed, which is read aloud each Sunday, confessing the tenets of the faith. He prepared a lesson plan to go through each sentence of the Creed and cited the passages and lessons in the Bible that correspond to each statement of faith.

After year one, Al agreed to undertake the challenge again … no small task, as the confirmation course runs every Sunday through the entire school year. He expanded the curriculum to take the youngsters through the basics of the Old and New Testaments, then carry on through the Nicene Creed.

Now, 14 years later, he is still going: Every Sunday at 9:15 a.m., eschewing even trips to Clemson home games when the kickoff is too late for him to return home to teach the following morning.

“Al knows how to inspire our children to read the Bible and how to love Jesus,” says Catherine Wallace. “He explains the stories in the Bible by using examples in our everyday life. I’ve had three children go through his class and every one enjoyed Al’s great sense of humor, kindness and generosity. They actually paid attention.”

Part of his secret of success is offering relatable and humorous teaching for seventh graders. At the end of each week he administers a test on the day’s lesson, with questions such as:

“How did God react to the odor of Noah’s sacrifice? A) It pleased Him. B) It made Him hungry. C) No smoking, please.”

Chase Wood, who assisted Al the year her son went through the class, said, “I learned more assisting in those classes than I did during my own confirmation experience. I loved how he would relate these ‘old’ time truths to what the young people can understand in today’s terms—then push them to vocalize how they might feel in similar situations.”

A legendary part of Al’s confirmation class is the reward each student receives every week for showing up on time and with their own Bible: A $2 bill.

“He says it’s only if they do those two things,” laughs his wife Kat, “but if they’re late he explains the importance of grace. Pretty much everyone gets the $2 bill.”

“I will never forget the time I saw Al and told him how proud I was that my daughter saved every one of the $2 bills,” continued Catherine Wallace. “Al’s reply was ‘tell her not to hold on to them—give them away!’ It was a perfect example of Al’s heart in a nutshell—always giving to others and teaching the importance of how Jesus gave everything for us.”

While Al taught only 12 students in his first class, attendance has increased each year to an average of 30 during the past 14 years. This year the number has topped out at 52. One of the reasons for the growth has been St. Philip’s generous policy of attendance. If a St. Philip’s seventh grader wants to invite a close friend to attend, the friend’s name can be submitted for review and approval by the pastor and the bishop. Obviously with 52 students, they are indeed generous.

The confirmation course has become a family affair for both Al and Kat’s families, with his longest standing assistant being his son, Will, who is in his 10th year of helping, serving both as an example to other children in the art of “paying attention” and participating in the discussion. Al’s sister, Sarah Marshall, is also one of his other long-term assistants. More than a dozen of Al’s children, nieces and nephews have pitched in to help—sometimes to teach and as Kat says, “Keep order. We are talking about seventh graders here.”

Treading in the Vineyard means different things to different people. It’s almost unbelievable to ponder teaching seventh graders for an hour every Sunday during the entire school year for 14 years—but the Vineyard is an unusual place. For some it means wading into the thorns and thistles, but for Al Phillips and his extended family, the Vineyard is a place to stand up. And teach. For almost a decade and a half.

I believe in one God, the Father Almighty, maker of heaven and earth, and of all things visible and invisible; and in one Lord Jesus Christ, the only-begotten Son of God, begotten of his Father before all worlds, God of God, Light of Light, very God of very God, begotten, not made, being of one substance with the Father; by whom all things were made; who for us men and for our salvation came down from heaven, and was incarnate by the Holy Ghost of the Virgin Mary, and was made man; and was crucified also for us under Pontius Pilate; he suffered and was buried; and the third day he rose again according to the Scriptures, and ascended into heaven, and sitteth on the right hand of the Father; and he shall come again, with glory, to judge both the quick and the dead; whose kingdom shall have no end. And I believe in the Holy Ghost, the Lord, and Giver of Life, who proceedeth from the Father and the Son; who with the Father and the Son together is worshiped and glorified; who spake by the Prophets. And I believe one holy catholic and Apostolic Church; I acknowledge one Baptism for the remission of sins; and I look for the resurrection of the dead, and the life of the world to come. Amen.