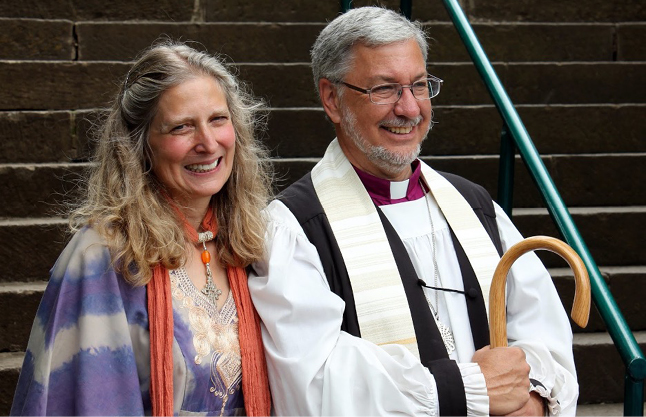 The Rt. Rev. Grant LeMarquand is a native of Montreal, Canada. He gave his life to Christ while in high school in a somewhat dramatic fashion (long story) and has sought to be a grateful follower of Jesus ever since.

Grant is a graduate of McGill University and Montreal Diocesan Theological College. He married Wendy (née Beraha) in 1980. He was ordained deacon in 1983 and priest in 1984 and served two parishes in Montreal before he and Wendy went to Kenya as missionaries of the Anglican Church of Canada. While in Kenya, Grant taught at St Paul’s United Theological College in Limuru and Wendy served as the college physician from 1987-89. Those three years in Kenya gave Grant and Wendy a love for Africa which did not subside.

Returning to Canada, Grant studied and then taught at Wycliffe College, Toronto, where he completed a Th.D. in New Testament studies. Moving to Pittsburgh in 1998, Grant served until 2012 as Professor of Biblical Studies and Mission at Trinity School for Ministry in Ambridge, PA. Throughout those years in Canada and the U.S., Grant was frequently able to return to Africa, both to do research and teach and to lead short-term mission trips of theological students.

From 2012 until 2017, Grant was the Area Bishop for The Horn of Africa within the Anglican/Episcopal Diocese of Egypt with North Africa and the Horn of Africa. His episcopal area was to include oversight of approximately 38 churches in the countries of Eritrea, Djibouti, Somalia, and Ethiopia. However, when the LeMarquands arrived in Ethiopia, there were approximately 50 churches in the episcopal area (and only about a dozen clergy). There are now more than twenty clergy and about 150 churches. In addition to training and being responsible for the clergy of the region and the building of numerous new churches, Grant supervised multiple programs, including a literacy program, youth ministry, Sunday school teacher training, lay readers training, and emergency response to crises, including fires, floods, and new refugees. He also oversaw the founding of a new theological college, St. Frumentius’, which had its first graduation in June 2018.

In 2014, Wycliffe awarded Grant a Doctor of Divinity, and in 2015, he was made Emeritus Professor of Biblical Studies at Trinity School for Ministry. That same year, Grant was commissioned  by the Archbishop of Canterbury and by Pope Francis to be one of 38 International Anglican-Roman Catholic Commission on Unity and Mission (IARCCUM) bishops.

Grant has written and edited numerous articles and books, including A Comparative Study of the Story of the Bleeding Woman in North Atlantic and African Contexts (Peter Lang), [with Marc Nikkel] Why Haven’t You Left? Letters from the Sudan (Church Publications), [with Joseph Gal-galo] Challenges to Theological Education in Contemporary Africa: Reflections on Curriculum Development and Theological Method (Zapf), [with Chris Barrigar] The True and Living Word: Sermons from the Community of Wycliffe College (Anglican Book Centre).

Grant and Wendy returned to North America in November 2017 due to Wendy’s serious health problems. Grant is now Professor of New Testament at Trinity School for Ministry and Co-Director of the Stanway Institute for World Mission and Evangelism at Trinity.

Grant and Wendy have two grown children (David and Chara) and one grandchild (Samuel).