Our church office is currently closed in anticipation of the storm, and the Rector's Bible Study is cancelled. Sunday services and all Sunday classes and offerings will proceed as normal.

Please join us for a reception in honor of the ministry and retirement of Florance Anderson and Pat Gould following the 10:30 service. 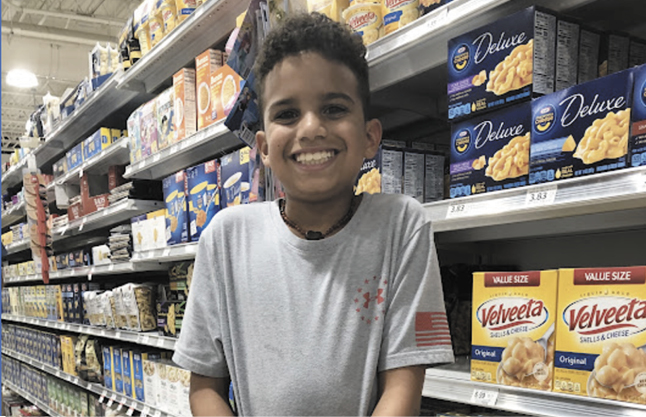 My son, Cash (yes, his name is Cash), had been wanting to earn more money to purchase the essentials of a 9-year-old: candy, video game bucks, and Pokémon cards. But I knew if I continued to give my hardworking son odd jobs around the house, I would soon be bankrupt. Fortunately, a divine opportunity appeared. One of our wonderful neighbors asked Cash to mow the lawn. (He agreed to add me as part of his mowing team on a voluntary basis.)

Cash did a great job, and the money started piling in. He was getting $20 each time, sometimes making $80 a month! I was really proud of him. He would faithfully put 10% in his Giving jar, 10% in the Savings jar, and the rest was for spending. He would never touch or ask to use the Giving jar for something else. The problem was ... he wasn’t sure where or how to give it. I encouraged him to think of things that he was excited about and could help people. But I just got the wide-eyed blank stare.

Several months later, we drove through a poverty-stricken area of town, and I pointed out different kids’ houses I knew during my days at Young Life. He asked a lot of good questions about their stories: what would happen if they didn’t have electricity, enough money for food, etc. Later that night, while eating his favorite meal in the entire world, mac and cheese, the light bulb lit up: to give people in the neighborhood we were in earlier boxes of mac and cheese.

Me: Why would you give them mac and cheese?

Cash: Because it is delicious, and it won’t go bad if the electricity goes out.

Me: Where would you get all of this?

Me: How much does it cost, and how would you get it to people who need it?

Me: How would you buy it? (He shrugged, moseyed over to his room… and came back a few minutes later carrying his Giving jar.)

Cash: How much could I buy with this?

We took the money out, counted it and did the math. It was $1.64 for a box of mac and cheese, but it was on sale—buy one, get one (BOGO) at our grocery store.

The next day we went to the grocery store and bought 60 boxes! Cash also threw in another $10 from his Savings jar for granola bars that were also BOGO (just in case there were “crazy people” out there who didn’t like mac and cheese).

We took the boxes to a food pantry and the lady there showed him how they stored the food, how people received it, and how helpful it was to them. It was a pretty incredible experience that changed Cash’s trajectory on giving, and he’s now looking for more opportunities to give.

Every time I went into Cash’s room, I saw his Giving jar continue to pile up. I’d ask him questions to spur him to take some kind of action, but nothing seemed to connect. I felt like a failure.

When Proverbs 22:6 tells us to train a child in the way they should go, part of that means allowing God to reveal Himself to your kids at His timing—and not getting in His way. God can do so much more for our kids than we could ever imagine and desire, and He always has their best interest in mind.

It can be a real challenge to “let go and let God,” especially when we think we know what’s best for our kids. But for this dad, you can consider this lesson learned ... at least for the time being.

Godly Grandparenting Matters is a monthly column that shares tips, books, and other resources to help you in your intentional grandparenting journey. If you have an activity or resource to share, please contact Lynn Dayton (lland312@gmail.com) or Jane McGreevy (janemcgreevy@yahoo.com).

The next Generations Ministry event is with Valerie Elliot Shepard and her husband, Walt, who will be speaking about passing on faith to the next generation. Wednesday, October 19, at 10:00 a.m.

Worship With Us on the Sixteenth Sunday After Pentecost!

Worship With Us on the Fifteenth Sunday After Pentecost