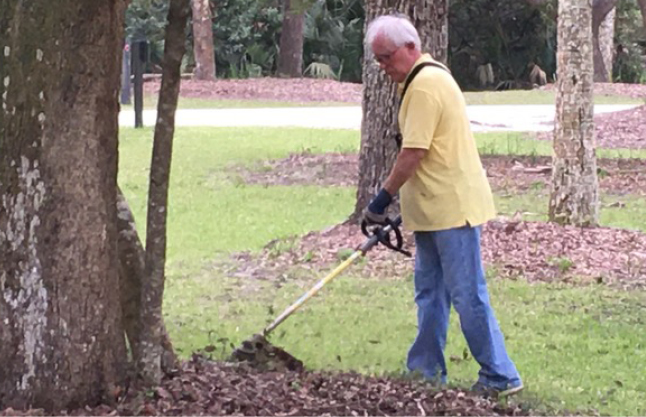 Vestryman Bill Warlick tends to the St. Christopher grounds with a weed eater. 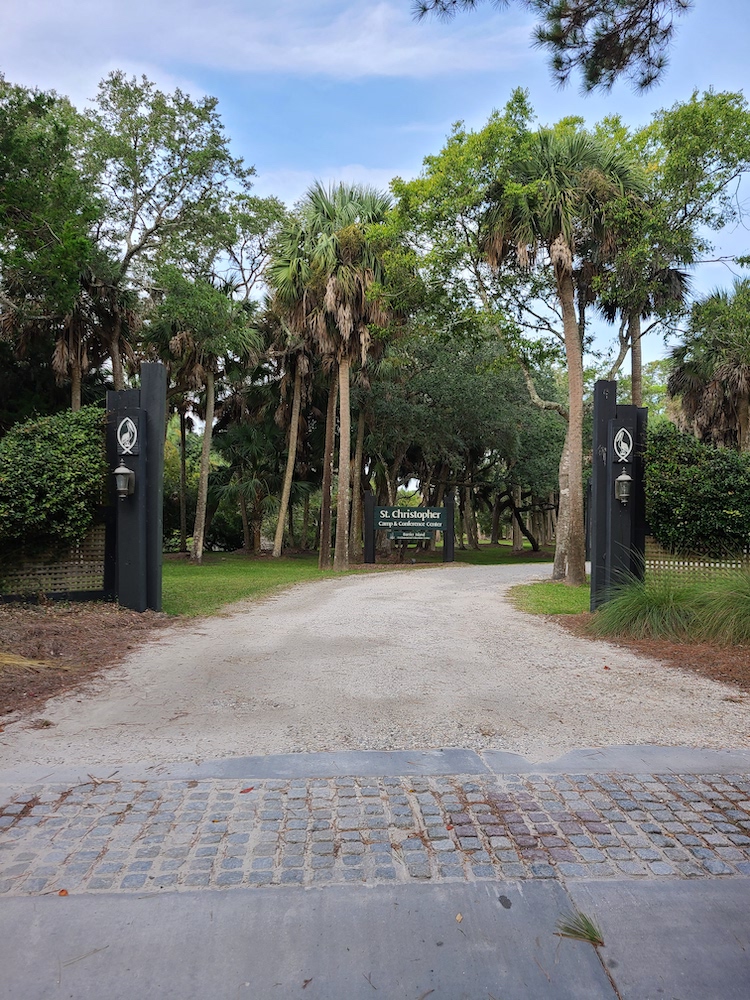 Robby and Todd, along with vestryman Sam Robinson, went out one Thursday early in September, and Todd wrote a humorous and entertaining email thread about their experiences, leading other Vestry members to comment that they wished they had been able to go! Their interest led me to propose the idea of a “Vestry led” workday at St. Christopher, and we put an invitation in the weekly eSPIRE newsletter so all St. Philippians could join. Others signed up to participate and agreed to bring equipment they had, and David Gilbert, the youth minister at St. Philip's, offered to recruit a number of the youth to join.

Early in the week leading up to the big day, October 10, the weather forecast for Saturday was abysmal; however, God had other plans and turned the day absolutely perfect with temperatures in the upper 70s. Thirty-eight of us gathered at the porch at Susanna's house at St. Christopher at 10 o'clock on Saturday morning. After an opening prayer, the four folks with chainsaws, the three folks with push lawn mowers, the two folks with riding mowers, the three folks with weed eaters, the folks with blowers and with loppers, and the rest of us armed only with gloves and a willingness to work spread out across the St. Christopher campus. 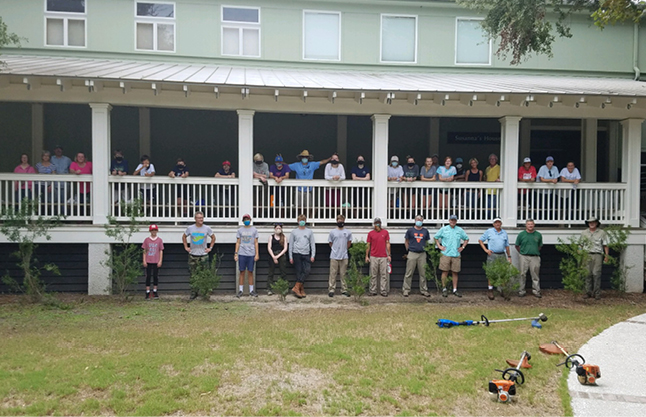 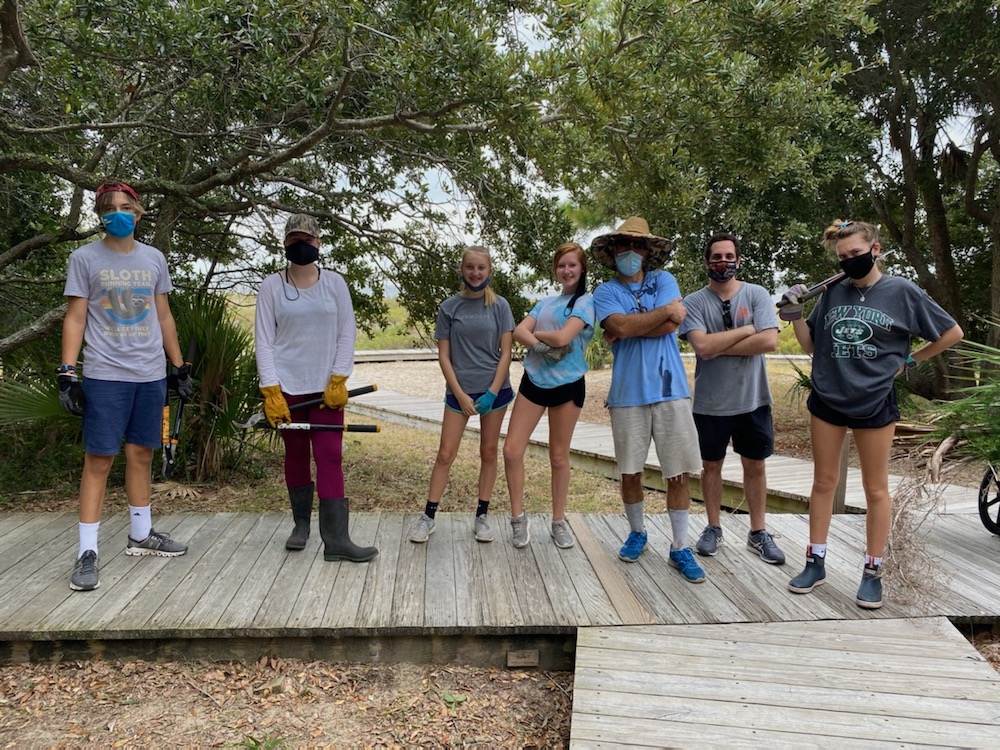 Some of the youth volunteers and their leader, David Gilbert (third from right).

The folks with the chainsaws and pole saws took some of the men and youth so that, as they cut limbs and trees, the men and youth could haul the cut items to the road for pickup. Others dispersed around the campus picking up palmetto fronds, limbs, and other fallen debris and placing those in piles on the roads for pickup as well. Still others tackled projects at the cabins to remove vines and plants growing on the outside walls of cabins and on the walkways. 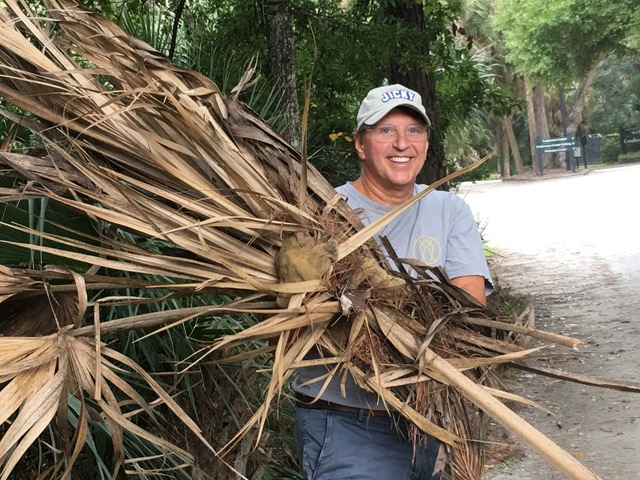 Jeff Rink hauls fallen palmetto fronds to add to one of the debris piles.

After about an hour, as the piles began to grow, some of the volunteers began using two of St. Christopher’s trucks to load the limbs, logs, vines, and other debris and haul the materials down to St. Christopher’s composting site about a mile from the center of campus. 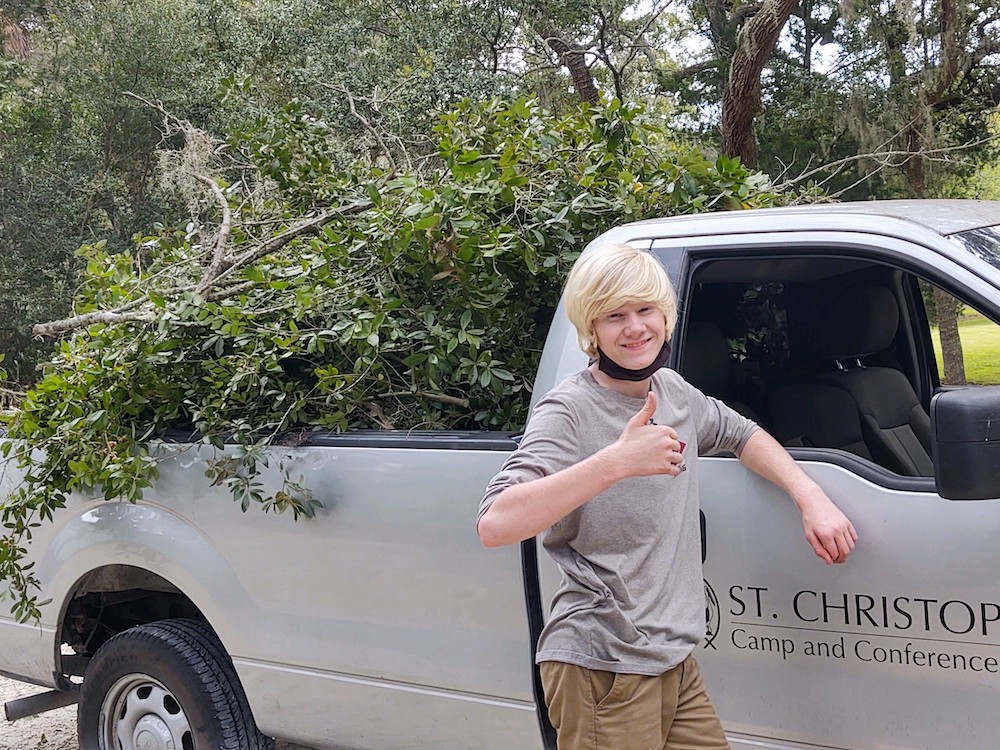 Mills Egleston makes sure the truckbed is totally full for the trip to the compost pile.

At 12:30, we reconvened as a group and had Jersey Mike’s sandwiches and water on the porch at Susanna's house. Then we headed back out for our tasks until 2 o’clock. By the end of our time, we had hauled 15 truckloads of limbs, vines, logs, and other debris down to the composting site! As we finished, Steve Zack, the St. Christopher official in charge of maintaining the grounds, stated that it would have taken him and his two other groundskeepers six months to do the work that the 38 of us had down in just over four hours!

By the end of the day, we had had a wonderful time together (some people operated lawn mowers for the first time––some almost drove riding mowers into the St. Christopher lakes), had developed new relationships that brought our church family closer together, and had restored some of the luster to the glory of God’s creation we are blessed to call St. Christopher.