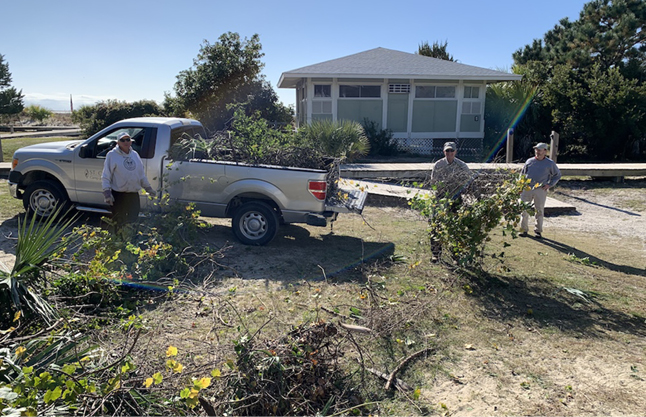 Saturday, the 20th of November, dawned windy and chilly with temperatures in the high 40s, but that did not stop 10 Saint Philippians from driving to Saint Christopher Camp and Conference Center on Seabrook Island for the fall cleanup day. Saint Christopher has been a sacred place where our triune God has met and blessed so many people in this Diocese. With COVID having devastated the budget of Saint Christopher, the maintenance staff has been reduced from seven people to two, so Saturday’s mission was to restore some of the glory of the grounds of this sacred place.
Armed with pole saws, loppers, chain saws, rakes, and clippers, Nancy and Lee Batchelder, Pam Paroli, Sam Robinson, John Kerrison, Steve and Elaine Jarrett, Andrew O’Dell, Bill Kauffman, and I tackled the vines, overgrown shrubbery, palmetto fronds, and stickers that had surrounded cabins, cottages, and the dining hall. Saint Christopher’s chipper was invaluable in shredding limbs, vines, fronds and shrubbery, but after several hours, the chipper was worn out and quit working, so the group used Saint Christopher’s truck to move 10 truckloads to the camp compost area! Thanks be to God for giving them the energy to make such progress at Saint Christopher and restoring some of its glory!

The Growth of Spiritual Life