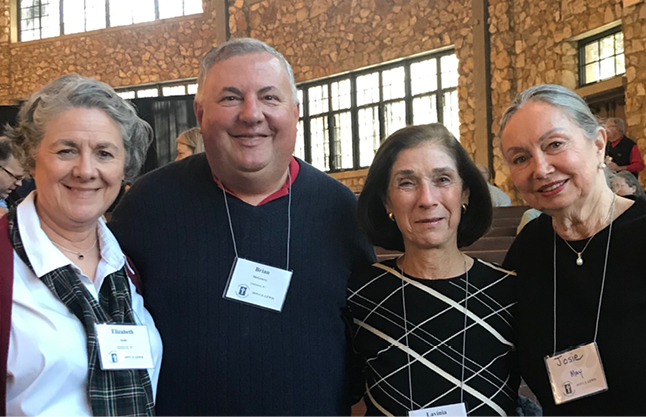 Elizabeth Scott (left) with the Rev. Brian McGreevy, Lavinia Thaxton, and Josie May

A note about C.S. Lewis from Elizabeth Scott:

Clive Staples Lewis was a literary scholar who lived, taught, and wrote most of his life in Oxford, England. He was born in 1898 in Ireland, but due to his mother’s early death, he was sent to boarding school in England as a boy. He endured many hardships and horrors serving in World War I and turned away from his early Christian upbringing.

After graduation from Oxford, he was appointed to that faculty, where he met J.R.R. Tolkien, a lifelong devout Catholic. For years Lewis remained a committed atheist. After years of friendship between this unlikely duo, Lewis finally came to Christ. His secretary was later to state, “He was the most thoroughly converted man I ever met.”

While his goal was to be a successful poet, his legacy was that of poetic prose. Despite all the accolades he received in his life he never lost his spirit of humility nor his sense of humor and was always dedicated to growth. When he embraced the love of God, he realized that his identity (as is ours) is based only on what God thinks of us. Reading his books is the best way to get to know the man and his message.

On a recent November mid-week, a small group of St. Philippians traveled up to the glorious mountains of North Carolina to attend a much-touted (by our beloved priest and C.S. Lewis aficionado, Brian McGreevy ) C.S. Lewis symposium. The conference was a packed time filled with insights and sharing to encourage us and engage us on our Christian journey. People from 28 states, England, and Malta were drawn to the beautiful village of Montreat for this experience, officially titled “C.S. Lewis: Influence and Relevance Today.”

The symposium delivered on that topic and so much more. Some of the greatest and most recognized Lewis and Inkling scholars came together to share not only the relevancy but the works themselves and the writers behind them. (If you do not know who the Inklings are, come to the gatherings on Wednesday nights at 7:00 here at St. Philip’s and Fr. McGreevy will see that you do! If you are aware of who they were, come and you will expand your learning!)

I remember reading that C.S. Lewis himself said that no book is really worth reading at the age of ten which is not equally worth reading at the age of fifty (or eighty, I would say!). I think that somewhat speaks of not only a good book but a good sermon (with which we are abundantly blessed Sunday after Sunday at St. Philip’s) and many good talks. The point is, though these scholars truly reside in a stratosphere above most of the rest of us, they spoke from the heart as well as the head and made the man, his colleagues, and their words and works come alive for the hearers.

The motto of Oxford University, Dominus Illuminatio mea––the Lord is my Light, the opening words of Psalm 27––was used at the opening of the symposium to emphasize the intent of our time together. The insights gained from the speakers as well as time spent with some of the nearly 600 attendees put flesh to those words.

Dr. Jerry Root from Wheaton College posed this question to us early on: “Did you come for a big portion of C.S. Lewis or for a big portion of the God Lewis served?” That was rather the tone of the symposium. Dr. Root spoke on the imagination of C.S. Lewis and how that influenced much if not most of his writings. He also quoted Lewis as saying, “Most of my books are evangelistic.” As Dr. Root is Professor of Evangelism, this topic is close to his heart. He encouraged us that, as it was close to Lewis’ heart as well, sharing the gospel was “showing them a light that is so lovely that they want with all their hearts to know the source of it.” (Madeleine L’Engle) He encouraged us to begin by asking questions, being interested in the person, speaking the person’s name, and telling them God loves them and knows them.

Actor Tom Key, who has been portraying C.S. Lewis since 1977, quoted many of Lewis’ works and poems during his incredible one-man performance, “C.S. Lewis on Stage.”

Dr. Diana Glyer (Azusa Pacific University) started as a teenager looking at the works of Lewis and Tolkien, and through her years of research almost single-handedly overturned the assumptions that the two had not influenced each other’s works. She spoke of their friendship as very different individuals: one a lifelong Christian and the other an avowed atheist in the beginning, how they possessed different temperaments, how they formed the Inklings and influenced the creation of each other’s writings such as Lewis’ The Space Trilogy and Tolkien’s Lord of the Rings, and how they committed to spending time together as friends. This only scratches the surface of what she brought to us.

Dr. Crystal Downing spoke about Dorothy L. Sayers, author of Man Born to be King, and the influence and friendship she had on and with Lewis. Sayers was also instrumental in early films and screenplays as well as children’s stories and dramas about Jesus for the BBC. Downing talked about how the media is picking up on Lewis’ influence and how it is resonating with many people and is therefore beginning to show interest in producing works from some of these authors. (Evidence of success of Lord of the Rings by Tolkien and an earlier adaptation of Chronicles of Narnia by Lewis were given as examples.)

Downing and her husband, Dr. David Downing, are the co-directors of the Marion E. Wade Center at Wheaton College, a special research collection of papers, books, and manuscripts primarily relating to seven authors from the United Kingdom, Lewis and Tolkien among them. One of the things Dr. David Downing talked about was the series of broadcasts Lewis gave to war-torn England from 1941-1944, which became the bestseller Mere Christianity. It still resonates very much today.

Dr. Hal Poe (Union University, Tennessee, and a direct descendent of Edgar Allan) addressed Lewis in relation to science and technology. He said that Lewis was fascinated with science from childhood and believed Christians should stay engaged with science and discovery and conversant with scientific understanding. He said Lewis did warn against linking Christianity to any scientific understanding because science keeps changing and expanding. Lewis, who even engaged in science and science fiction in some of his writings, saw science as describing the physical universe; it doesn’t have tools to describe other worlds or universes. He did see it as a way of looking at God’s creation.

Douglas Gresham, Lewis’ stepson, was in attendance, captivating us with stories of many of his intimate experiences with his famous stepfather. He shared his love for “Jack,” as Lewis was called by his friends and family, by giving a touching and memorable accounting of what it was like to know the man when he (Gresham) was a child, Gresham still carries that torch of protecting Lewis’ works by being the one to give the OK to any productions based on the writings. He was insightful as well as somewhat flamboyant, dressed in black knee-high boots and turtleneck and sporting a white goatee!

A final panel on Friday morning addressed why C.S. Lewis is so popular with religious America. He appeals to the total cross section: evangelicals, Roman Catholics, Orthodox Christians, progressives, and even non-believers. He is a hot commodity right now and even Hollywood is cashing in on this ticket. We also heard from members of the Presbyterian Heritage Center, which was the sponsor of the symposium.

This summary doesn’t even begin to do justice to the richness of the information and sharing we received. One of my main takeaways was gratitude to God for enabling these men, especially C.S. Lewis and J.R.R. Tolkien, to write the words they did now some 80 years ago that are still so applicable to us personally and to our society today. We still have much to learn from these men and they have much to tell us.