So ... Where Did Those Chairs Come From? 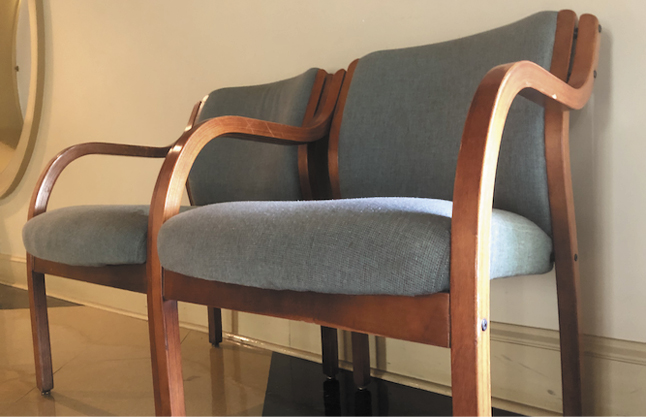 I’ve overheard that question a number of times on the second floor of the Parish House. If you’ve been to Adult Forum, you may have seen them against the back wall. Well ... here’s the answer!

A number of years back, Suzy McCall was on a visit home to Charleston from the mission field in Honduras. She was told of the impending demolition of the Navy barracks and was offered the furniture in the building. But––it had to be removed quickly.

Jennie Simmons (from St. Andrew’s) and I went to see what was available. The person in charge unlocked the door and left us to our “inventory.” Keep in mind there was no longer any electricity in the four-story building. Anywhere without a window was quite dark. When we finished and got back outside, I said to Jennie, “Well, now that we are out, I can tell you that I was worried about finding a dead body in there!” Jennie replied, “Well, actually, I was more worried about finding a live one!”

We quickly found space to store the furniture and a group of volunteers to get the furniture out of the building. Remember––no electricity, no elevators, four stories.

On each floor, Preston Hipp and Kent Keller pushed mattresses to one end of the hallway. And then pushed them through the window to land below. We were able to get out bunk beds, chairs, and heavy wooden units with storage and a drop-down desk.

The U.S. government has a very helpful Denton Program which will fly donations on a space-available basis to qualified recipients. Like all U.S. government programs, it has a lot of paperwork involved.

We had to itemize everything on a manifest. For boxed items, we had to enter length, width, height, and weight. After a few times of weighing the boxes, Gene Lesesne was able to lift a box and say, “45 pounds,” and I would enter “45 pounds.”

Then we had to have a government agent come to inspect our items. I was terrified––a government inspector! When a small group of us met him at the storage area, Mary King (from St. James) said, “Why Johnny Smith, I haven’t seen you in ages!” I became less terrified.

In the end, everything made it to Honduras. Everything except the chairs you see upstairs in the Parish Hall!

If you go to Honduras to work with the LAMB Institute and Suzy, you will see at the children’s home the furniture from the old Navy Base Charleston.

(Of those who helped in this project, Preston Hipp, Gene Lesesne, and Mary King have since passed away. We honor their service to the Lord.)

So ... Where Did Those Chairs Come From?