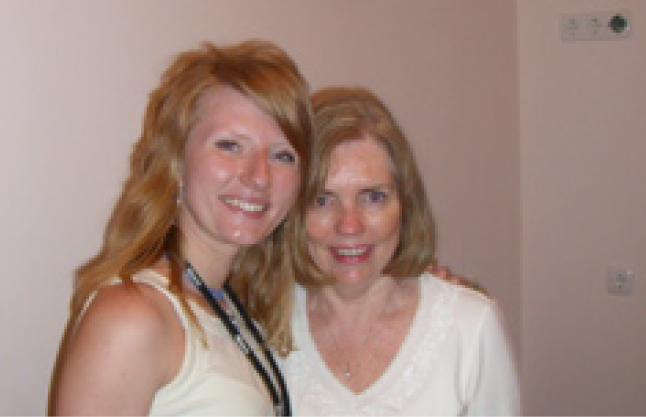 Descending into the Ukrainian air space on a freezing January day, it looked like we were landing in Siberia. Snow enveloped Kharkiv, a city with a population of 2,000,000 located twenty miles south of the Russian border in far eastern Ukraine.

After we landed, customs officials placed Tom and me in separate cubicles. Following serious "pat-downs," the husky, unsmiling customs officer extended her hand. Not for a handshake, but a bribe!

“Nyet,” I said firmly, using one of five words I know in Russian. She blocked the door of the cubicle and thrust her hand toward me again. Breaking out in a sweat in the freezing cold room, I looked her in the eye and firmly repeated, "Nyet." ("No.") Then I heard voices outside the door calling our names.

“Tom!” “Jayne!” “Where are you?” Our friends we'd met on previous mission trips to Ukraine came to meet us. I recognized Larissa’s voice speaking boldly in Russian.  Whatever she said caused the customs officer to move away from the door, and I quickly stepped out past her.

We'd come to Ukraine on several short-term mission trips with teams from St. Luke’s Anglican Church in Akron, Ohio, but this was different. Tom had sensed the Lord leading him to apply for a Fulbright Scholarship with the U.S. State Department to do scientific research alongside young Ukrainian scientists at the National Academy of Science, Institute of Single Crystals. Awarded a Fulbright, he received an all-expenses-paid five-month stay in the cold, post-Soviet industrial city of Kharkiv! Tom desired to share the love of Christ with scientists schooled in "there is no God" communistic atheism. Young scientists desired to learn new technologies from the west. God opened a door.

I just wanted to be warm. My one request for this five-month survival tour was having a flat where we controlled the heat. I knew horror stories of deadly cold Ukrainian winters without heat save the open oven door. Request granted. Housed in a flat along with Ukrainian elite athletes, we stayed warm and cozy.

Soon Tom made his way into the bleak laboratories at the National Academy of Science. He became the first American to conduct research at a former Soviet chemical laboratory.  But that’s his story.

“God, what do you have for me to do here?” I asked. I can’t speak Russian, nor decipher the Cyrillic alphabet. I am literally a Russian illiterate!

I hired Katya, someone I'd met on an earlier mission, as my personal interpreter. She needed the work; I needed a guide and translator. I told her of my passion to teach the Word of God to all ages, and she arranged my schedule. For five months, we spent nearly every day together. Wise for a 25-year-old young believer, she opened the Ukrainian culture for me. Our work relationship turned into a strong friendship forged by many unique experiences.

Together, Katya and I prayed and asked God for open doors to meet with people to share God’s love and truth. Soon our schedule filled with invitations to do presentations in schools and university classrooms to students and faculty. Even my academic background as an English teacher brought opportunities. God uses everything!

While under communist suppression, only one highly regulated Orthodox church remained open in the city. When the Soviet Union collapsed in 1990, spiritual hunger surfaced and Christianity spread like wildfire. Church plants springing up all over Kharkiv introduced Ukrainians to the hope of the gospel replacing abject despair. It was as if the windows of a nation opened and Holy Spirit blew fresh joy throughout the land.

Rows of gray concrete Stalinist housing with identical floor plans reinforced socialist ideals of sameness. Now lively house churches meet in flats all over the city. Katya scheduled  with house church leaders to have me come and teach the Word. Never have I witnessed such a hunger for biblical truth as I did in these dear people in the house churches. 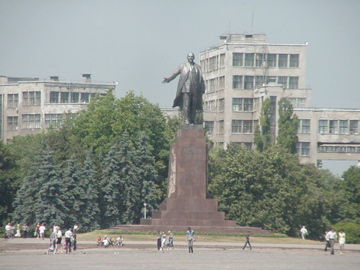 One encounter vividly stands out to me. Katya and I walked across Sloboda (Freedom) Square, past the monstrous statue of Lenin on the way to the metro station. We entered a decrepit, crumbling concrete building.

Climbing to the fourth floor, we entered a flat overflowing with people of all ages. Leading me to the kitchen and the samovar (tea urn), my hostess offered me a cup of tea. Ukrainian hospitality.

I noticed a shelf on the kitchen wall with several small vials of medicine. I wondered who in the flat was ill. Balanced on a small corner of the the sunken sofa, I taught the Scriptures while Katya translated my teaching into Russian. Many requested prayer. A young man walked into the room carrying a child of four or five years of age.

He asked if I would pray for healing for little Sergei, his son, who barely ate, slept little, and had a skin rash covering his body. His condition had persisted for several months, and his parents were deeply troubled. As I moved toward the father, Sergei began screaming loudly and throwing himself backwards, trying to wrench himself from his father’s arms.  His face contorted in misery and fear. My heart broke for this small boy. I knew he needed a healing touch from God.

I told Katya to ask everyone present to pray for God to heal him. Kneeling down by the sofa, I cried out to the Lord, “Lord, I ask you to come in your mercy and heal little Sergei.”  Then the Lord spoke, “Baptize the child.”

“What?” I asked the Lord incredulously.

“Baptize the child,” He again spoke. I know His voice.

In that moment, I chose to put away all of my thoughts, doubts, and theological arguments. Rising up off my knees, I said to Katya, “Ask if they have a bathtub.”

“Really?” Katya exclaimed. I could tell she didn’t want to ask the question. I looked at her and smiled. She turned to Sergei’s parents and sheepishly asked, “Do you have a bathtub?”

“Please ask them to fill it with warm water, because the Lord wants me to baptize him,” I stated.

During this time, Sergei continued to scream and contort himself. I urged those present to pray fervently and ask God to come with His healing power and love.

We made our way to the back of the flat to the bathtub. Sergei’s mama removed his shirt and pants while he pitched a fit. Kneeling alongside the rusting iron bathtub, I prayed.  Lifting my arms, I asked Sergei’s daddy to hand him to me. I cradled him in my arms and  lowered him into the water. He instantly quieted and relaxed.

With trusting eyes, Sergei looked up at me as I sprinkled water over his head and face.  The familiar words came.

“Sergei, through your baptism, may you be reborn into the life and healing of Jesus Christ.  I baptize you in the name of the Father, the Son, and the Holy Spirit. Amen.”

Sergei’s eyes closed. His body became limp as I lifted him out of the water.  His mama held out a towel and we dried him off. Wrapped tightly in another towel, he drifted off to sleep. She carried him to his bed.

On Sunday morning we went to Father’s House. Sergei’s mama came running across the room. Excitedly, with smiles and tears, she spilled out the good news while Katya translated. Jesus healed Sergei! He began eating, sleeping, and playing after he woke up from his long sleep. The rash covering his body had disappeared.

Katya later admitted she didn't know where we were going with the whole bathtub episode. I told her I didn't know either! But I knew God had asked me to do it, and I’ve learned it is always better to obey Him. I thanked Katya for partnering with me.

… The sheep hear his voice, and he calls his own sheep by name and leads them out.  When he has brought out all his own, he goes before them, and the sheep follow him, for they know his voice. (John 10:3-4)

Please understand: I’ve never baptized anyone before or since Sergei! But at that moment, I knew God’s Holy Presence with us in that Ukrainian flat with an old rusty bathtub.

To God be the glory!