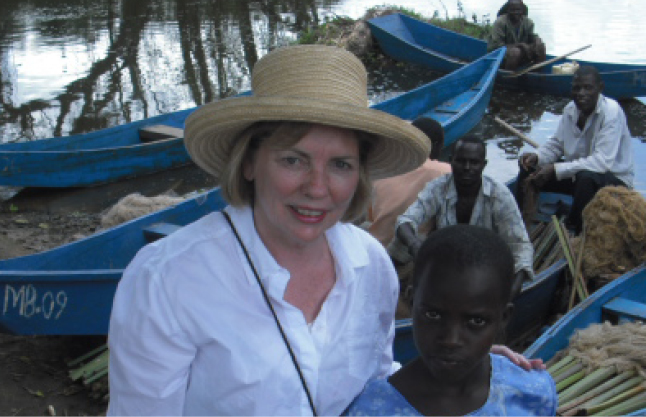 Jesus nudged me to write out the gospel in preparation for a Sharing of Ministries Abroad (SOMA) mission trip to Uganda in May of 2011. On a yellow legal pad I wrote the story of Jesus walking on the shore of Lake Galilee. He watched Simon and Andrew as they cast their nets into the sea and said to them, “Come follow me and I will make you into men who catch people instead of fish!”

Walking a little farther, Jesus found two other brothers, James and John, sitting in a boat with their father, Zebedee, mending their nets. Again Jesus said, “Follow me.” At once all of these fishermen left everything and followed Him!

Multiple yellow pages accumulated on my kitchen table recounting the message of the gospel to repent and receive forgiveness of sins, and Jesus and His authority speaking to turbulent seas, rebuking demons, and healing the sick, culminating in His death on the cross, shedding His blood, paying the price to redeem us, and bringing us to our Abba Father. The amazing Good News!

Our SOMA Team landed in sultry Uganda just a few days later. For Tom and me, the core of the mission was speaking at a Clergy and Wives Conference in the Ankole Diocese on the topic of marriage, “The One Flesh Relationship.”

Thinking we had completed the mission, I leaned back and relaxed in the Toyota van filled with young Ugandan priests and our team. We laughed and talked and ate samosas. After a precarious boat ride to see hippos, crocs, and exotic birds, we were back in our vehicle when Canon James Hinde asked our driver to take us off road.

Wait a minute, I thought, this is not what I signed up for! We careened through the bush, passing termite mounds and spotting zebras, impalas, antelope, and bush bucks. The van lurched to a stop, perching on a hill overlooking Lake Mburo. Canon James, motioning for us to get out of the van, said he had wanted to meet the people in this fishing village for a long time.

We stood on the shore facing fishermen sitting in their boats having just returned with a fresh catch. Along the bank another group of fishermen sat cross-legged, mending their nets and placing fish on long sticks for smoking over hot coals. An ancient and primitive scene.

Canon James greeted the fishermen in their tribal dialect. Turning to our team, he asked, “Who would like to give greetings to these men today?”

No one spoke. No one moved. Cultural shock at play! I thought, I can at least give greetings from America and bless them in their fishing endeavors.

I told Canon James I would give greetings. “Great!” he exclaimed. Saying something to the fishermen, he quickly turned back to me and loudly announced, “Jayne, preach the gospel!”

What? I thought, Preach the gospel?! Then I remembered the yellow legal pad thousands of miles away on our kitchen table. Silently I prayed, Lord, don’t fail me now! In that moment did I hear His joyous laughter?

Rev. John, a youth pastor standing next to me, whispered, “I’ll interpret.”

Beginning in a small voice, I shared the gospel to men in boats and on the shore. From the manger to His baptism and temptation to calling fishermen in their boats and mending their nets to His miracles, death on the cross, and His resurrection. I ended in a voice filled with fervency and passion!

“He died for you! He loves you! He is here today to forgive your sins, and when you repent and turn to Him, He will give you eternal life.”

All the while in telling this greatest of all stories, my worst nightmare materialized. Slithering across the water between boats and heading directly towards us there appeared a 10’-12’ Egyptian Cobra, an aggressive snake with a deadly bite. Desperately I attempted to keep my focus on Jesus and the gospel! Help me, Jesus, I prayed.

Then a man with a menacing look came down the bank toward us. With a thick tribal accent he hissed, “You are scared, aren’t you?”

At that moment I had no fear. “No. I am not afraid,” I replied. I knew the presence of Jesus was with us on that beach!

This man, who I later learned is a witch doctor, began verbally attacking Canon James, telling him he had no right to be there and we had to leave immediately. He was very upset we had come to the fishing village unannounced and without his permission. Most likely he would never have given his permission, and Canon James Hinde understood this. The witch doctor was not about to give up his false authority over the fishermen and their families.

With the Egyptian Cobra closing in and this angry man hurling threatening accusations, the atmosphere intensified. Canon James lifted his hand in the air as if to strike, but he spoke in a voice of full godly authority to the witch doctor, “Stop talking and leave. We came here today because God sent us.” 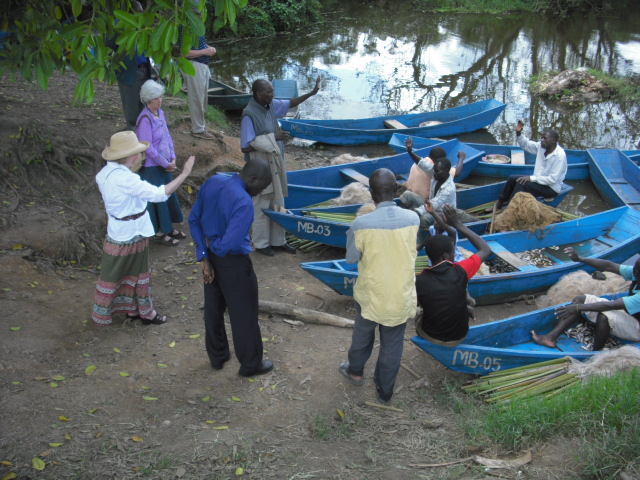 God’s holy presence accompanied with His indescribable peace permeated the atmosphere. The witch doctor stopped talking. The Egyptian Cobra changed course, veering away from the boats and disappearing into tall reeds. The men in their boats and the men on shore prayed with hands lifted to receive Jesus in their hearts. There was no question of the enemy’s defeat and God’s Kingship on that beach that afternoon, and the witch doctor made no further attempt to try to stop what our all-powerful God did in the hearts of the fishermen.

Since that day I have great joy and boldness to share the love of Jesus with all those God brings into my life. I will never forget being a witness to the power of the gospel! I asked Canon James what would happen to these fishermen who prayed to receive Christ. “Don’t worry,” he said. “We will come back and build a church right in the center of their village!”

I hope it will be called “St. James.”