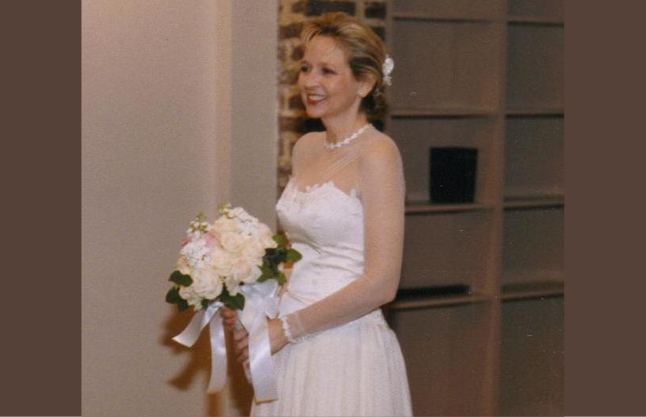 I began tithing sometime after college when I began my first job. Despite being a young believer, I understood that tithing was a way to show God how much I trusted Him to provide for me.

Then a speaker came to St. Philip’s in the mid-1980s whose message greatly impacted my thinking about giving. I was challenged not only to tithe, but to see everything I had as God’s and to realize what a blessing it would be to give more and more to the work of the Kingdom, in and out of the church. I decided then to start tithing my gross income…which was a big step for me. Since that time, I have experienced the faithfulness of God in providing for me in some truly remarkable ways.

For example, when I was about 24, I went all over town hunting for a pair of white shoes for a party for my sister when she was getting married. By then I had gone back to school for nursing and had very little money. I searched in vain for something I could afford. I was leaving on Friday to go home to Columbia for the party. On Wednesday night, Martha Vetter, my roommate at the time, some other friends, and I were coming down the steps from our apartment on the third floor of 82 Rutledge Ave. On the landing in front of another apartment was a plastic trash bag. Out of the side of the bag was the tip of a shoe. A white shoe. A pair of size 7B Aigner brand new white flats to be exact! They were in that trash bag getting ready to go out to the street!!! Yep, I took them right then and there and said, “Thank you, Jesus!” I wore those shoes at the party and for many years after.

Many things like this have happened to me over the years. Anyone who has been in Bible study with me has heard lots of these stories. Not only has the Lord provided things that I have needed, but so many times, He has provided something that I had not even asked for, that was over and above what I needed. I am convinced that Jesus has a very special place in His heart for His single girls.

Another time I remember well was when I bought my little house on Hickory Street. All my friends had either gotten married or gone to the mission field. My parents had been urging me to buy a house for several years. To me emotionally, buying a house as a single woman was like giving up the dream of getting married or being called to the mission field (which is what I thought I would be doing).

But I found this precious little house in West Ashley and, with Kitti Mullins’ help, I bought it for a reasonable price. I was warned that some parts of the house were on their last leg ––like the heating and air system. But, that lasted, oh, maybe another 15 years. The refrigerator––that lasted some 20 years…and so on. Just coincidences? I don’t think so! And this little house became a sacred place for me and Jesus. He was present with me as my Husband and my Maker during those days in ways I cannot fully describe. I was very, very loved.

However, one of God’s stellar surprises was yet to come. In 2000, I reconnected with a man I had met at St Philip’s and dated 10 years before, Kent Keller. He was in town visiting some friends, and he and I went as friends only to Jordan and David Gilbert’s wedding. We ended up dancing the entire night! Then, after being in touch a little bit that next year, we decided to begin writing intentionally and see where God would lead us.

In July of 2001, not long after that decision had been made, Sara Hinkle (Forbes), who loves a great sale, called to tell me that the Salvation Army Store on Dorchester Road had some designer wedding dresses, size 8. I had my godchild from Honduras, Ruth Fiallos, living with me while she went to Trident Tech. Just for fun, we decided to go out and look at those dresses.

Now I had only had a few real boyfriends in my life, and never had any reason at all to look at wedding dresses. I didn’t know anything about anything related to the subject. Despite that, we went out there. The Salvation Army store was like a big warehouse; everything was neat, but there seemed to be endless rows of clothes. Eventually we found the wedding dresses. I pulled one out and decided to try it on. We had to step into the bathroom for me to change. It took Ruth about 10 minutes to button up the back of this dress. I looked at myself in the mirror. To my surprise, I realized that … I kind of liked it.

At that moment, I had a strong sense of something being said to me: “You are going to get married in this dress.”

Remember, Kent and I had only just begun talking regularly. So, I was surprised to find myself soon asking the shop ladies if I could take the dress home to show my friends. They said, “Sure!” They didn’t want me to pay them or even give them my name.

After we returned home, I asked my good friends Sara Hinkle (Forbes) and Tammy Barnes (Gottshalk) to come over and look at the wedding gown. (For years, we were single girls in Bible study together.) When they saw me wearing the dress, both Sara and Tammy encouraged me to buy it, even though I was not engaged or anywhere near it. The moment of truth still to come, however, was when I took it over to Maria’s Alterations in South Windemere.

If you have ever been to Maria, you know that she is a person of few words and fewer smiles. She is just a stern, all-business kind of woman. She had altered a good many things for me in the past, and she had barely said anything to me through each encounter other than “turn around” or to suggest, “This high?” Yet that day, when I came out of the dressing room, Maria exclaimed loudly, “That is beautiful!” Moments later, she said again, “That is so beautiful!” I could not believe what I was hearing!

In fact, God would bless me in another remarkable way at Maria’s shop. (I’ll get to that in a bit.) After leaving Maria’s, I decided I was keeping that dress, no matter what! Still not knowing the who, when, and how of my supposed marriage in that gown, I went back to the Salvation Army and bought the dress for $50. 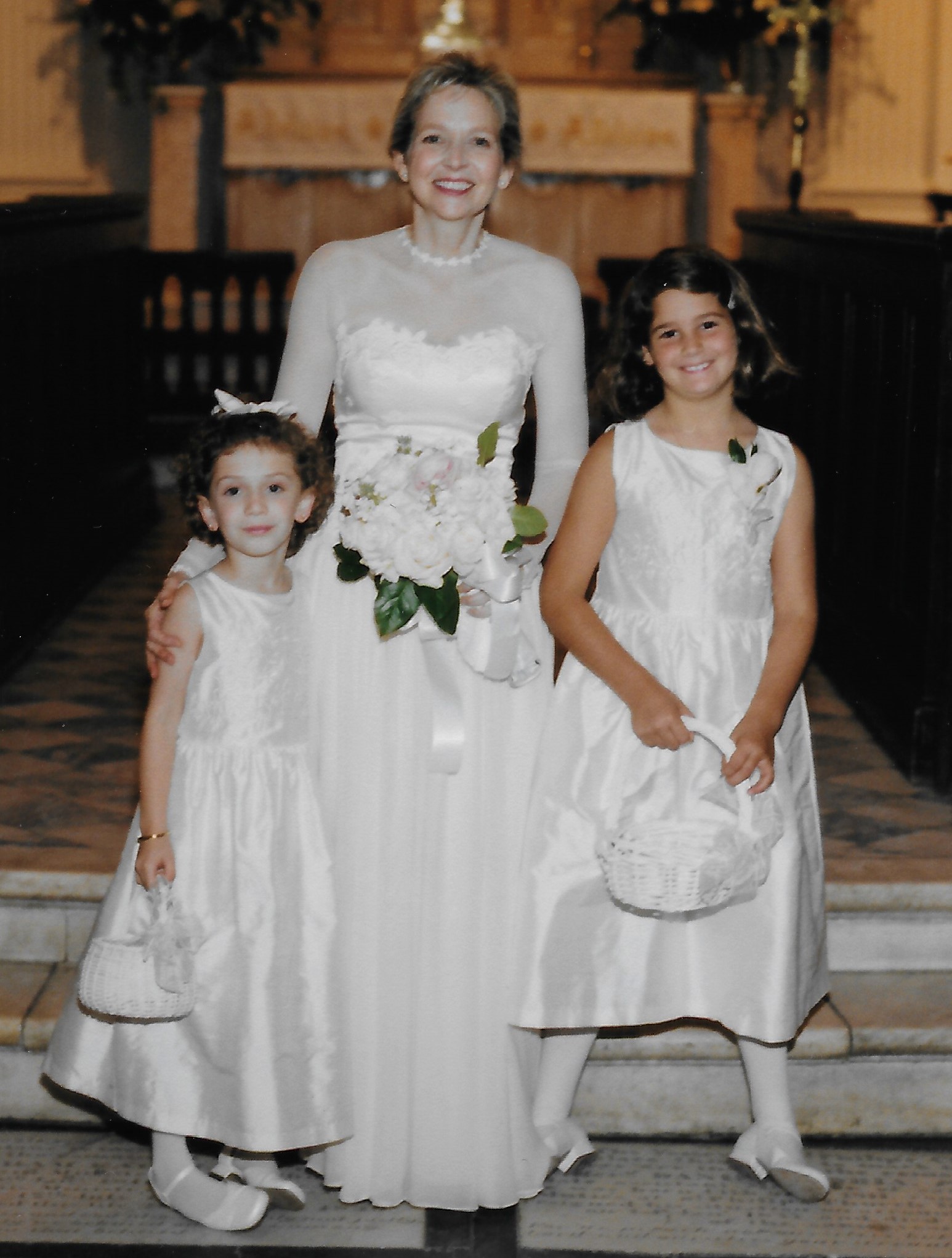 Well, you probably guessed it: on September 28, 2002, Kent and I did get married at St. Philip’s, and my precious father walked me down the center aisle in that dress. Before the wedding, I couldn’t tell my sweet parents or anyone else where I had purchased the gown. That was top secret.  I felt they would have been mortified to see me getting married in a thrift store dress. But afterwards, they were as amazed and pleased as I was to hear what had happened. I can still remember Bill Warlick telling me (before he knew the story) that my dress was the most appropriate and beautiful dress for a 47-year-old bride!

Here’s the other marvelous part of this amazing gift from God: Maria assured me that the dress fit me perfectly at every angle. It needed absolutely zero alterations. Every bride and mother of the bride will agree that this is a very unlikely situation.  Even the hem was just the right length. I only had to have it dry cleaned, and it was good to go! The Lord was making it crystal clear once again of His special love for me and that He truly is Jehovah Jirah, my Provider.

Which brings me back to tithing and the mystery of how God provides for us. Do we continue to tithe? Yes! Are we wealthy people? Well, how do you define “wealthy”?? We live in that same precious little house in West Ashley, known to my friends and family as “The Pink House.” While most people have a little house when they get married, then get a bigger, then bigger one when the children come, only later to go back to a smaller, more manageable dwelling, we just missed that whole middle section! We live simply and are happy givers to some great things that God is doing, especially St. Philip’s. We are wealthy with precious friends, sweet families, and true Christian community. We are wealthy with both having skills that serve others––I as an oncology nurse and Kent as an accomplished carpenter. We are wealthy in that we have a strong marriage based on our love for Christ and His Kingdom.

One other beautiful thing that God does as we trust Him in tithing: this act of faith sows contentment in our hearts. I truly do not desire a big house or expensive things. I am so thankful for all that the Lord has provided for me over all these years, but most of all, for the gift of His life given for me on the cross. My sins are continuously forgiven, I know the very presence of the living God, and I am learning more each day how to live for Him more fully.

Presently, Kent’s work is slowing down a bit, and I am looking towards retiring from my nursing role at the Hollings Cancer Center later this year. With our income diminishing somewhat, I am experiencing some twinges of anxious thoughts about finances. Yet I only need to remember His mighty faithfulness over these years, and I have peace again. We are, as missionary Amy Carmichael liked to say, “tucked in” with Jesus. That is the most lavish, secure, and loving place to be!