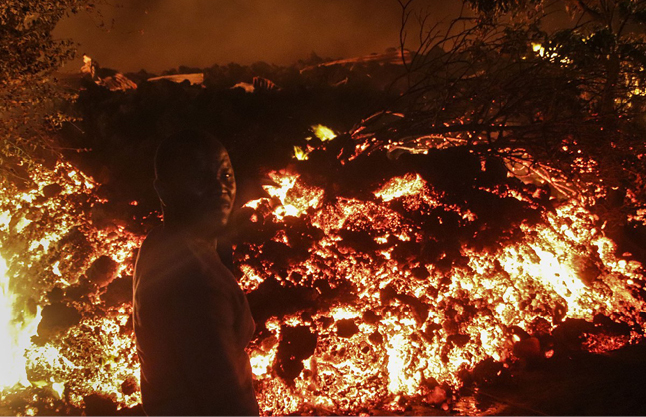 This past Saturday night, May 22, Mount Nyiragongo erupted in Goma, Congo, just across the border form Rwanda. The volcano is only one hour’s drive from my home in Rwanda, where I lived for almost six years. This town is named Musanze, but it was named Ruhengeri when I lived there. You can easily find it on a map and see how close it is to the volcanic site.

Towering over Congo and Rwanda, the 11,385 ft. high Mount Nyiragongo is currently one of the world’s most active and deadly volcanoes. Initial estimates are that thirty-five people died from the recent eruption. According to the Weather Channel, over a dozen people died in car accidents while trying to evacuate. Lava hit the homes of one neighborhood and destroyed over one thousand homes, killing at least thirty-two people.  On Monday, families walking across a wide expanse of the cooling lava died from the poisonous gases. Over thirty thousand people have fled their homes, and many have streamed like a long line of ants into nearby Rwanda.

Today, May 25, the area is further ravaged by numerous earthquakes––every ten minutes, according to one of my friends. The strongest earthquake so far registered 4.7 on the Richter scale. While this doesn’t sound so strong, it is powerful enough to destroy many poorly constructed homes in the area. In fact, I have contacted several of my friends and former students who live near Goma, and they have left their homes and are spending their time outside just in case their homes cave in. It is a sobering experience for me to be so far away, knowing that my friends are in harm’s way.

One reason this hits so close to home for me now is that this same volcano last erupted in January 2002 when I was living close by and serving under the auspices of the Anglican Church as a Bible teacher at Sonrise School for Orphans. At the time, I wrote my friends about that experience, and I would like to share some of it with you here. It begins with the familiar hymn How Great Thou Art:

O Lord my God, when I in awesome wonder,
Consider all the works Thy hand hath made.
I see the stars; I hear the mighty thunder.
Thy power throughout the universe displayed.

Then, I continued, “The words of this hymn aptly describe my experience over the last few weeks. Mount Nyiragongo, the volcano that recently erupted in western Congo near the border city of Goma, is situated only about fifty miles from my home. Only two days after the eruption began, I traveled with Bishop John Rucyahana to the town center in Goma to see the mass destruction from the volcano’s angry blast. The lava was still smoldering, the gases were still popping, and the fire was still spewing forth tendrils of smelly, burning ash and smoke. I could reach out my foot and touch the lava!

"Though we who live in Ruhengeri were not directly affected by the lava flow, we were overwhelmed with refugees who were seeking food, water and shelter. I saw a woman with one child hanging in a sling on her chest, another child strapped with cloth on her back, and other children cuddled up close. The woman looked me straight in the eyes and yelled at me, 'My children and I are hungry! Why don’t you DO something!?' Her words seared my heart. You can imagine my feelings of incompetence. What could I, a muzungu (white person) from comfortable America, do for this family who was literally experiencing hell? Even if I gave her the bread and peanut butter in my backpack, I might start a riot. I was paralyzed.

"I was also completely powerless. It is one thing to hear that a volcano is erupting fifty miles away. It is another thing to be awakened in the middle of the night by huge jolts from earthquake tremors. For ten days after the eruption, I slept with the house key in the door and my shoes, flashlight and water bottle by my bed. I couldn’t control the quakes, but I could at least be prepared for the worst if I had to run out fast!

"At times, I was paralyzed. At other times, I was powerless. But, during this time when everything seemed unstable and unpredictable, I also experienced an incredible peace from the Lord. It was as if God were saying, 'You are here for such a time as this.' And I believe I was! Soon after the initial eruption, Joy, the business manager at Sonrise, waked me up at 12:20 a.m. to say that she had just received a phone call. The caller informed her that a reporter on the radio had just announced that, according to the movement of the earth’s tectonic plates, a strong earthquake was expected to occur in Ruhengeri around 2:00 a.m. We called Bishop John and others, and in ten minutes, we were riding in the back of an old pickup truck in the dark and silence of an eerie night on our way to Sonrise to prepare the children.

"How does one prepare over three hundred children for a potential natural disaster in the middle of the night? We couldn’t do a lot, but we did what we could. We woke up the children and got them dressed. We pulled down all of the upper bunk mattresses and placed them on the concrete floor below. We turned out the lights and encouraged the children to go back to sleep.

"After the children were back in their rooms, we prayed for God’s protection and provision. I read Psalm 27 and had it translated out loud. Verse 5 exclaims, 'For in the day of trouble he will keep me safe in His dwelling; He will hide me ... and set me high upon a rock.' Then, we waited and watched.

"Several powerful tremors sent out frightening jolts, and twice the children sprang out of their beds and came bounding outside. After the second big jolt, the children were of course not able to sleep. I didn’t blame them! We gathered them from their rooms at 3:00 a.m. and huddled up together in the courtyard. Little by little, at first timidly but then with building enthusiasm, the girls began to say prayers and sing praise songs before our Lord. One by one, little girls, some as young as five years old, stood up and cried out for God’s protection. It was a profound moment, listening to their prayers, all in Kinyarwanda, and seeing their earnest faces as they poured out their fears to God. Despite smog from the volcano, the stars were shining, and I image that God’s heart was also shining with great delight. By 4:00 a.m., all was calm and peaceful. The girls returned to their rooms, and 'THE' earthquake never came.”

If you are so moved, I ask you to pray for these people in the Congo and Rwanda, including my former students, that they will be reminded of "how great Thou truly art!” Amen.